These were private swimming baths opened by John Smith in 1846 and Birmingham’s first open air swimming pool. He placed considerable emphasis on the  delightful neighbourhood as well as the purity of the  water.

“To those who have not paid a visit this Establishment, nor enjoyed the benefits of Bathing, the Proprietor respectfully invites attention to the large and commodious Swimming Bath, situated in a neighbourhood celebrated for the salubrity of its atmosphere and surrounded by extensive and beautiful scenery ; whilst the spring water which supplies the Baths, being always fresh from its continual flow, possesses properties of a curative nature, highly recommended by the Faculty as conducive to health, vigour, and pleasure. Stabling and other conveniences are erected for Gentlemen attending in carriages or on horseback.”

However, it seems that John Smith was also responsive to customer feedback, as he announced that he would also open one day a week exclusively for ladies.

“TO LADIES. BALSALL HEATH BATHS, George-street. JOHN SMITH has the honour to announce that, owing to numerous applications from the LADIES of Balsall Heath and the surrounding district to enjoy the luxury and pleasure of Bathing, he has made arrangements to devote one day in each week, commencing on Wednesday next, from 10 a.m. till p.m., until further notice. To the Teachers and Pupils of Ladies’ Seminaries, the above arrangement it is hoped will offer an opportunity of indulging- in this most healthy and delightful recreation. The greatest attention and strictest privacy to those Ladies who may honour the Proprietor with their support may be confidently relied upon. N B. An elderly and experienced Lady will be constant attendance”.

The Baths were quite extensive with a  large pool 100 metres by 50 metres as well as  two or three small private baths. They occupied a site stretching from Edward Road  to about half way up George St. 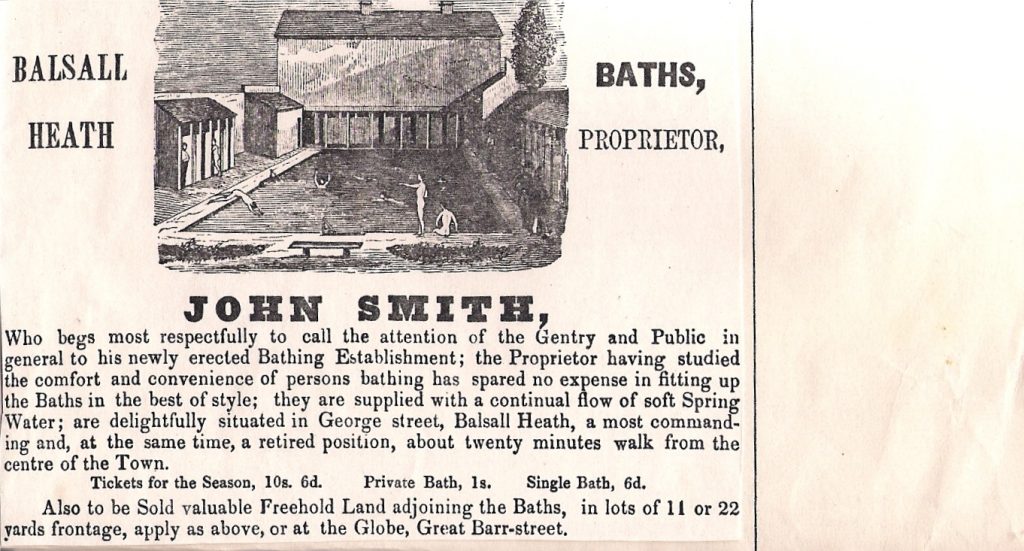 John Smith himself died in 1859/60 but the business was continued by his widow, Rebecca. In the 1871 census she is still listed as Baths Proprietor but by then was 76 years old.

By 1877 the Baths were in a sad state, John Smith’s son, John offered them for sale to the Local Board in May that tear but they declined. Then in December   there was a spate of correspondence in the Birmingham newspapers. The neighbours were obviously very unhappy and, indeed, also sent a petition to the Local Board.. They claimed the  Baths were now a threat to health.

”If the facts are as he states-viz., that his late respected stepmother drank the water and reached nearly ninety years of age, then surely it ought to be widely known that this is the ” perennial spring” so favourable to longevity. But Mrs. Smith never did drink the water, and the ” perennial spring” has nothing in common with this malarious pond, which, while I write, is covered with dirty scum, green shine, and bubbles. The perennial spring runs under the street and takes another course, not through the pool. Medical men say it is injurious to health, and fevers are traced to it as a source.”

The Board ordered Mr Smith to fill in the pool.  However, the site remained in his hands because he sold it in the end to John Bowen, the renowned builder, in 1880 for a magnificent £2150.